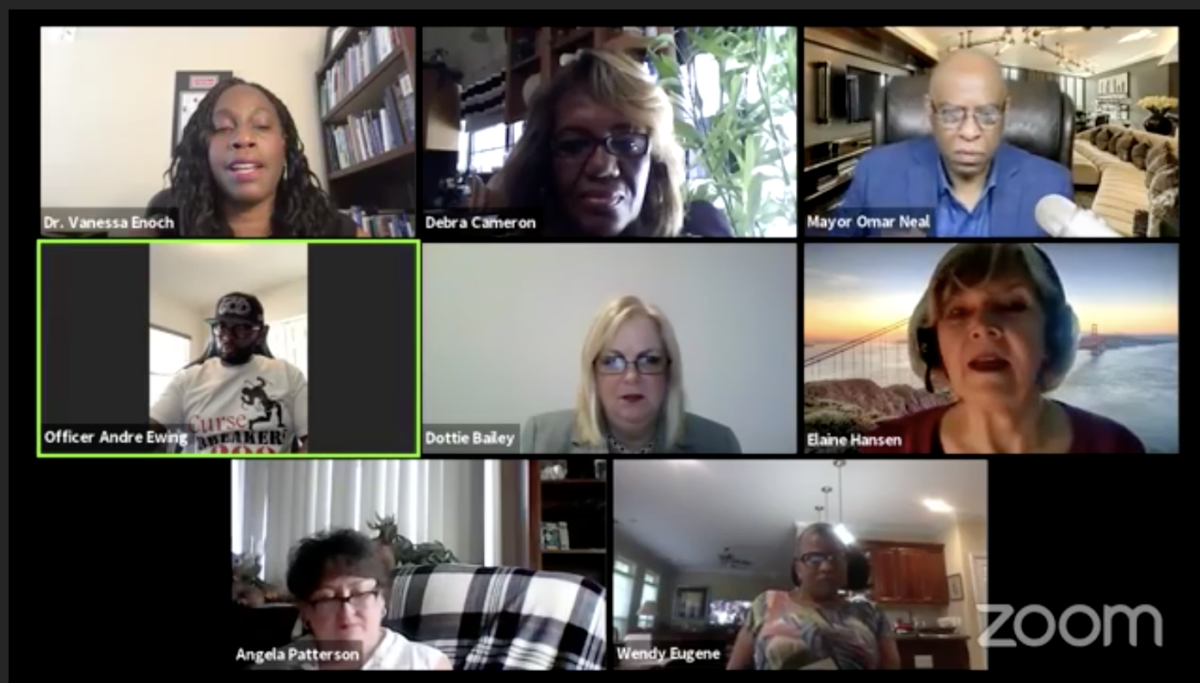 8th Congressional District of Ohio- July 25, 2020— Vanessa Enoch, a Candidate for Congress hosted a virtual town hall tomorrow, Saturday, July 24. The town hall is designed to draw attention to alternative approaches to policing and protecting vulnerable and marginalized communities, in the midst of global outrage surrounding the killing of George Floyd (a black man), at the hands of a white Minneapolis police officer. Racism and police brutality have been hot button issues in state and local governments, and at the federal level since the recording of Floyd’s killing emerged. The killing has prompted activists across the country to call for divesting funds from police departments and reallocating them to non-policing forms of public safety and community support.

Protesters believe that cities and states spend far too much money on their police departments without sufficiently funding education, mental health, housing and other community-based social services. There is a growing demand for political leaders to “defund” the police – that usually means reducing funding, not cutting it altogether.

Dr. Enoch will host a moderated discussion with participants from law enforcement, a former Mayor of Tuskegee Alabama, a mental health professional and mental health advocates. The discussion is designed to draw attention to Mental Health Alert Wristbands and community oriented policing models.

“I believe that we are better when we listen to each other and develop solutions that benefit everyone,” Dr. Enoch explained. Enoch believes that transformative change in policing will require input from various perspectives, so that the safety of citizens are not at risk. “Too many lives have been lost at the hands of a militarized police force, which has increasingly engaged in military-style tactics. Citizens who have been mischaracterized as enemy combatants, rather than citizens who are presumed innocent until proven guilty in courts of law. Mentally ill citizens are especially vulnerable. They are often treated like common criminals and in some cases even killed by police officers who are trained as domestic soldiers, rather than citizens sent to serve and protect.

The panel discussion will be streamed and recorded for later viewing. Participants can register and join the discussion live on Zoom by registering on the events calendar on the Enochforcongress.com website or by going to Register in advance for this webinar at:
https://zoom.us/webinar/register/WN_7n9k5BU8Sne_isvjtT-ILg. They can also watch on “Vanessa Enoch for Congress” Facebook page.

Dr. Enoch believes that The Mental Health Alert Wristbands are a small way to promotes mental health awareness. Dottie Bailey says The Mental Health Alert Wristbands are bringing Law Enforcement together with those who have a mental illness in a circle of unity. The navy blue represents Law Enforcement, and the silver represents those who have a mental illness. On the outside of the wristband are the Med Alert symbol, CIT (Crisis Intervention Team) acronym, and the CIT ribbon. Dr. Enoch hosted this virtual town hall to allow citizens from the mental health and law enforcement communities to share different perspectives and ideas about community oriented policing.

Dr. Enoch holds a Ph.D. in Public Policy & Social Change. She ran for Ohio’s 8th District Congressional seat in 2018. This year, she will again face an uphill battle in a Gerrymandered district against the incumbent Warren Davidson, who she believes takes the vote of 8th district for granted. Enoch would be the first woman and the first African American to ever hold the seat, and the first Democrat to win in 81 years. Enoch believes her victory would mean that citizens will finally have a voice in government, after 81 years of a lack of representation for working class citizens.