Why we must protect a woman’s right to choose 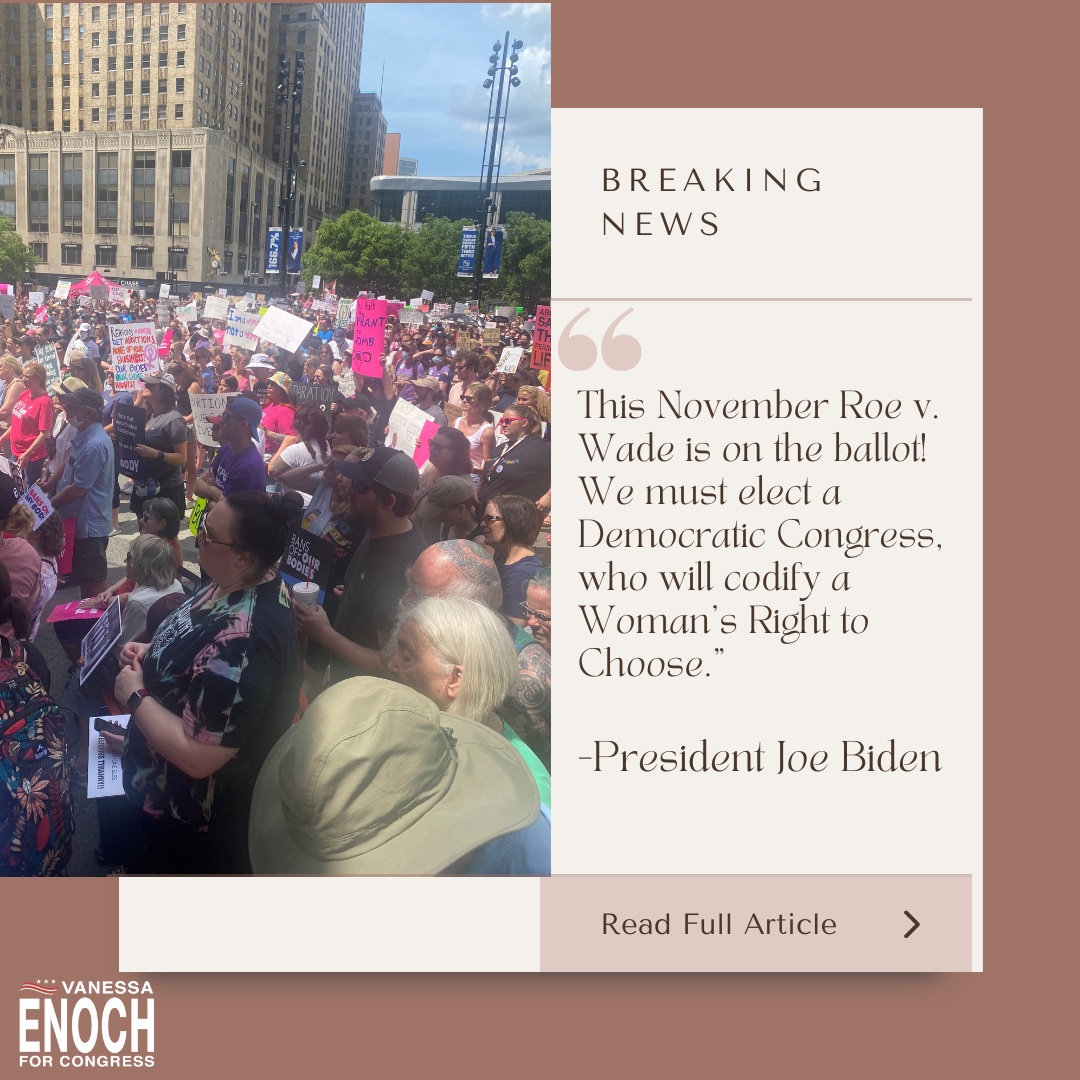 Why we must protect a woman’s right to choose

Why we must protect a woman’s right to choose.

I received this response to an email I sent out regarding the implications of overturning Roe v. Wade. Today, legislation went into effect overturning the fundamental right of women to control their own bodies. In the words of President Joe Biden, “This legislation is so extreme that it literally forces a woman to carry her rapist’s child. CONGRESS MUST CODIFY A WOMAN’S RIGHT TO CHOOSE. This November Roe v. Wade is on the ballot! We must elect a Democratic Congress, who will codify a Woman’s Right to Choose.” You have the ability to elect Vanessa Enoch and other like-minded legislators who will protect a woman’s right to choose. Donate now to protect women’s rights!

Please take a look at this communication that my friend wrote in response to my call to protect the right to choose.

I have been thinking about the debates on abortion laws and the Supreme Court”s likely action to reverse Roe v. Wade. I believe current arguments start in the wrong place…on the right to life of a fertilized egg as though it suddenly appeared inside a woman.

Anti-abortion laws with a focus on the fetus’s right to grow to term more precisely are designed to protect men’s right to procreate. Men’s sperm entering a female body should be the focus of this debate, yet discussion of men’s primary role in pregnancy is conspicuously absent. A man’s sperm is responsible for initiating any pregnancy. An egg might be a necessary condition for the formation of a fetus, but is only a man’s action…his introducing living sperm into her body that makes pregnancy possible. To be clear, women do not “get pregnant”…, they are “made pregnant.”  In the case of pregnancy, the power balance is in favor of men. While the man is responsible for initiating the creation of the fetus, once the egg is fertilized, all responsibilities for the safety of that fetus immediately shift to the woman.

The man’s action of expressing his sperm into a woman or girl is required for him to procreate. His sperm effectively hijack a woman’s womb.  Laws that prevent women from taking action to recover their bodies and their futures are an insidious form of gender discrimination.

The gender power imbalance in pregnancy is exacerbated when anti-abortion laws refuse to take into account health risks associated with the pregnancy and childbirth, the circumstances of impregnation (including rape, incest), the capacity of the woman or girl to provide for this child, the presence of anomalies which will shape the child’s as well as parent’s future, and the impact this pregnancy and birth might have on all other aspects of the mother’s life.

Men’s right to procreate takes precedence over all considerations related to the rights of the woman.  His right to a woman’s womb is protected while he bears no responsibility for the outcome. He is not required to ensure food or shelter, protection, or medical care for the woman carrying the fetus he created. If she dies during the pregnancy or during childbirth or as a result of post-partum events, he is not held responsible for her funeral expenses or attending to all the responsibilities she can no longer fulfill. He is not required to pay off her debts nor provide for the family she leaves behind.

The situation if Roe Wade is overturned is to confirm men’s right to procreate while using women’s wombs and bodies as necessary tools to achieve this outcome.

To illustrate how the power balance would shift if a woman had a similar right to procreate,  imagine the following scenario.

If women…rather than men… had the right to procreate, they would be able to demand a man or boy’s sperm (typically obtained via sex) to achieve their goal of procreation. To further illustrate the role reversal, once a fetus is formed, the responsibility for the child would shift to the man to provide food, shelter, medical care, etc. to ensure a healthy pregnancy and childbirth. The fact that he did not want this baby would be irrelevant. He would have no right to terminate the pregnancy under any circumstances even if the woman were doing harm to the fetus, birth defects were identified, if she were related to him (incest), or if he experienced violence or harm during their sexual encounters. Donate Now to protect women!

The woman’s right to procreate would not include the responsibility to parent or to provide for the child.  Once the child is born, unless the woman files to obtain custody, the man would immediately assume the role of primary parent. Even if the child is born with serious health problems, mental or physical disabilities, or the father was financially or mentally incapable, he would still be responsible to care for his baby. To make the father’s situation more comparable to a typical woman’s, he would be required to parent for several years and could not immediately put the baby up for adoption.

With the power balance favoring women over men, I can imagine men becoming outraged that they were forced to impregnate…not necessarily with a woman of their choice…and then forced to parent and provide. Men or boys forced to fulfill a woman’s need/desire for sexual relations would be held responsible for any resulting pregnancy. I can only imagine how preposterous men would find this shift of “right to procreate” to women and how outraged they would be that their lives would be transformed by the responsibility to raise this child. It could be even more complicated if he needed to bring this child into a home he shared with his wife and other children. The fact he did not want this pregnancy would fall on deaf ears.

Abolishing legal abortions will predominantly impact people whose choices are already limited by coercive relationships, arbitrary religious doctrines, and limited means. Those with influence and money will always find ways around inconvenient laws. This is why we must protect a woman’s right to choose

I hope we live to see the pendulum swing back toward compassion and respect for women and the hard choices we face. I wish men so quick to judge what women must do could walk a mile in their shoes.